Georg Buchner’s dreamlike social satire, written in 1836, is not the easiest play to stage and director Lydia Ziemke’s production does a good job of teasing out the play’s comic elements as well as of exploring Buchner’s recurrant theme of man as automaton. […]

This is a production that strives for and occassionaly achives, a sense of the magical. Fortunately imagination is not in such short supply — there are a number of wonderfully inventive touches in Ziemke’s staging, not to mention some nicely handled physical comedy, in particular the scene when the befuddled King has to be dressed by his two courtiers.

Some strong performances help matters further and there is an excellent rapport betweeen Theo Cross, as the idle, bored Prince Leonce of Popo, and Will Beer as his jester-like friend Valerio. The latter’s antics do much to inject the humour and lightness into the production. (The Stage, Tuesday, 23 January 2007)

When someone feels that they have a task as laborious and meaningless as that of Sisyphus, perhaps they have a right to feel melancholy. Indeed, when that person has their fated love chosen for them, they can feel disempowered and hopeless. Yet, when that »one« is the romantic Prince of Popo, and he is being accompanied by such a starry-eyed and lyrically swashbuckling companion as Valerio, then spirits can only rise. This is the set-up in Lydia Ziemke’s reinterpretation of Georg Buchner’s satirical play Leonce and Lena, which has just opened at the Tabard Theatre in Turnham Green.

As Prince Leonce and his compatriot Valerio embark on their quest for love and the meaning of life, they cut through many of the duchies, principalities and other small »onion states« that have long since disappeared from the European map. Like the early 19th-century map of Europe, Ziemke’s adaptation is full of quaint arrangements that make the multi-faceted scenes, from melancholic to comic, in the hunt for »Destination True Love« thoroughly enjoyable and alive.

Sign-posting the action with comic interludes from the senile King of Popo and his sycophant advisors, Ziemke keeps the performance fresh and relevant to today’s world. Immersed in the spirit of Kant and Schopenhauer, repeatedly called the most pessimistic of all philosophers, the often dark satire springs to life in the most unexpectedly comic moments, aided with the humorous grace of a well-cast ensemble awash with talent. Buchner’s original play acutely lampooned the society he shunned. Similarly, through well-timed turns from the fabulously senile King Peter (David Morley-Hale), his dry-witted Minister (Will Tosh), and the charismatic Valerio (Will Beer), we find many a moment to reflect on the ways in which the excesses of power are objectionable and ridiculous.

Cross, as Leonce, deserves a particular mention. As the self-obsessed Crown Prince, he grabs the audience, holding their attention for the best part of an hour and a half as he stomps from one hissy fit to the next. Yet he shakes out their emotions until the audience is positively willing him to succeed. Embellished with beautiful turns of phrase, delivered with the clarity of winter air, Leonce and Lena is a production that, though on a limited budget, does not cut corners. The set is ample with one cloth prop throughout and a velvet backdrop because of the clever use made of it proving that less can truly be more. All in all, however, much like our masked automatons, this is a striking play with many faces. And the production is truly a new flowering for an old classic. (Jonathan Grant, my London your London) 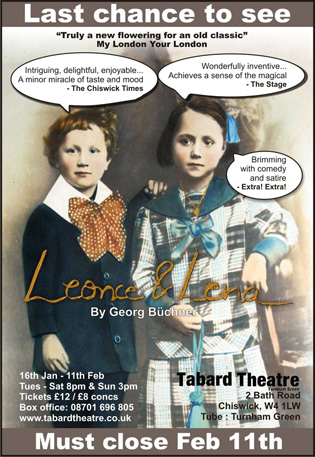 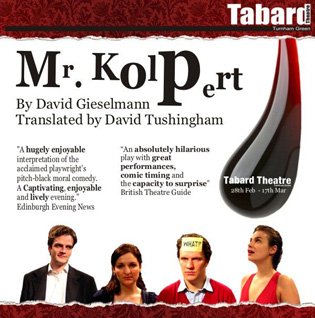 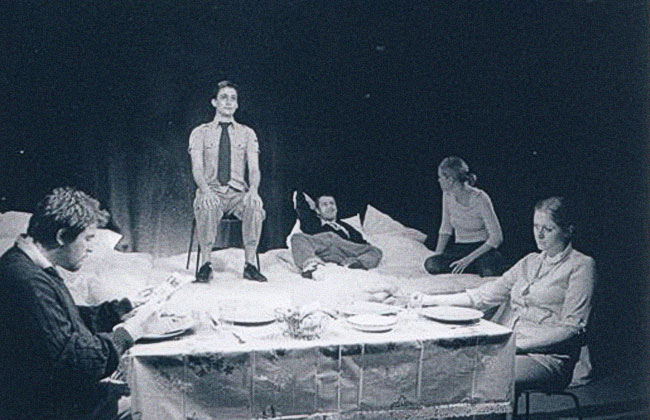 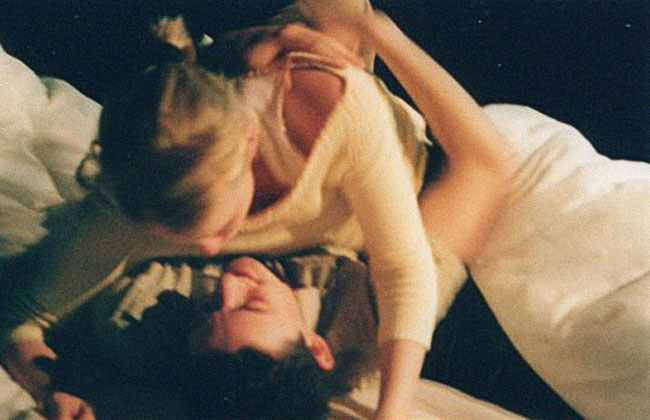 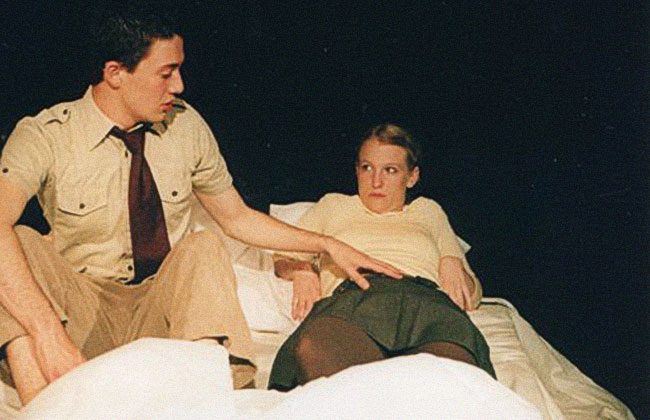 The Germans seem to know far more about the blackest comedy than the British. It is hard to think of a British play that is anything like this, with the possible exception of The Lieutenant of Inishmore by Martin McDonagh.

A very avant garde young couple — Ralf, who is a chaos researcher, and Sarah welcome one of her colleagues to a foodless dinner. The apartment is a lesson in minimalism as many objects are replaced by their names like a modern art exhibition.

Edith arrives with her potentially psychopathic husband, Bastian. The play is always unpredictable and absolutely nothing can be taken for granted. The person next to you in the front row could be a reviewer or the possibly dead eponymous nonentity.

The comic timing and capacity to surprise under the direction of Lydia B. Ziemke rarely misses. For those with strong stomachs and a good sense of the surreal this is an absolutely hilarious play with good performances from all four actors mentioned above as well as Liam O’Dwyer as the pizzaman who gets sucked into the gore, almost literally.

It is to be hoped that the relatively new Gilded Balloon Studio Ensemble continues to produce adventurous work of this quality for many years to come. (Philip Fisher, Britsh Theatre Guide) 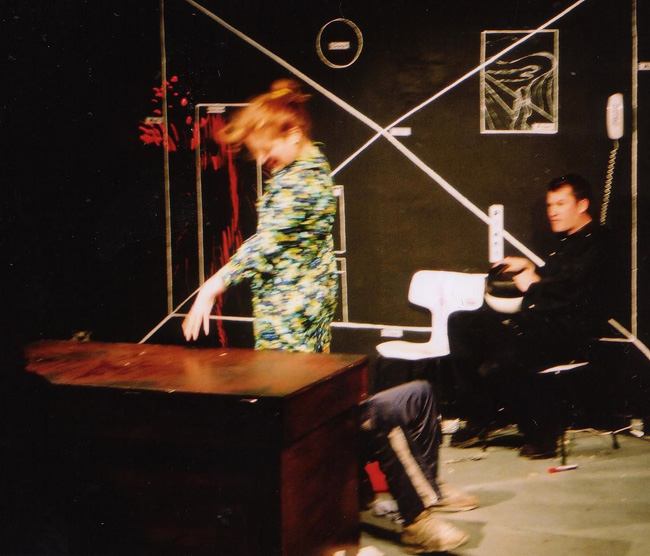 […]
Pit Bull is a meditative piece by French writer Lionel Spycher. Set in a soulless tower block, where suicide by rooftop plunge is not unusual, it centres on four young people and their coping strategies. Luc trains his dog for the fighting pit; Thomas, the philosopher poet, gets wasted on heroin; his over-affectionate cousin, Princess, places nave faith in God. And, Thomas’s jealous admirer Leila loses everything when her brother kills himself and her Muslim father rejects her.

That’s it for plot: Spycher’s stagecraft is meandering, lacking dramatic development, but there’s no denying the script’s linguistic energy — especially in the monologues by Gary Dobson’s charismatic Thomas — but it’s more a poem for four voices than a satisfying drama. (Andrew Burnet, The Sunday Herald / Theatre, Mar 3rd, 2002) 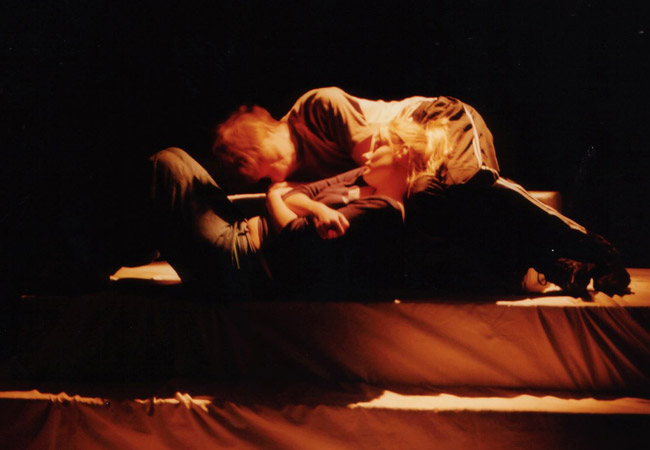 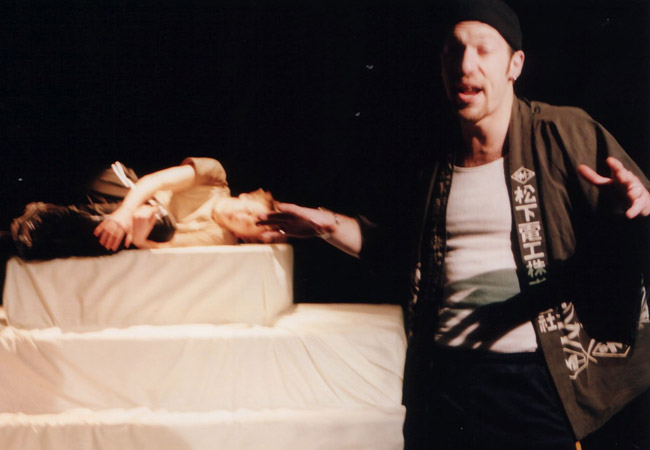 Heavy themes also dominate two shows from the Gilded Balloon Studio Ensemble’s Civil:Lies season. Shopping And F***ing is Mark Ravenhill’s pungent exploration of a post-Thatcherite wasteland. Its young characters buy and sell comfort in the form of sex, drugs, chocolate or oven-ready meals, but if they want a creed or mythology they have to invent it themselves. It is convincingly performed by the student-led company, with fine performances from Clare Carnsey, Liam O’Dwyer and co-director Chris Perkin, and is bitterly funny.
[…]
That’s it for plot: Spycher’s stagecraft is meandering, lacking dramatic development, but there’s no denying the script’s linguistic energy — especially in the monologues by Gary Dobson’s charismatic Thomas — but it’s more a poem for four voices than a satisfying drama. (Andrew Burnet, The Sunday Herald / Theatre, Mar 3rd, 2002) 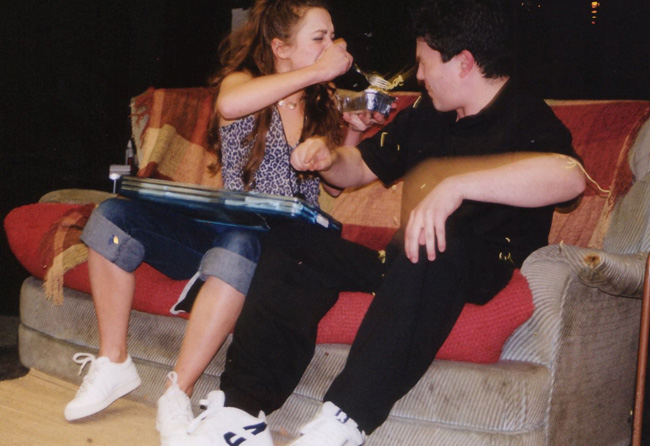 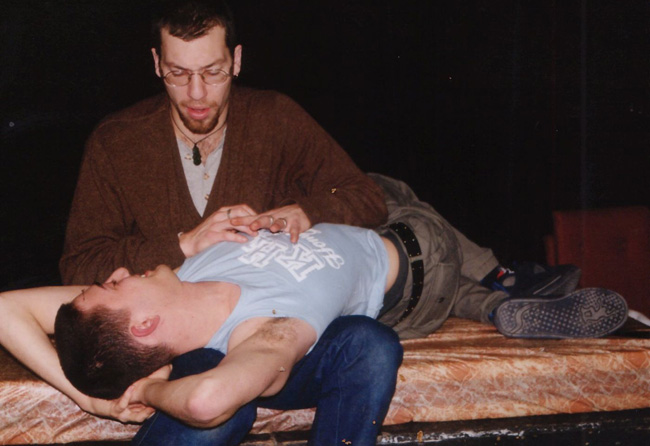 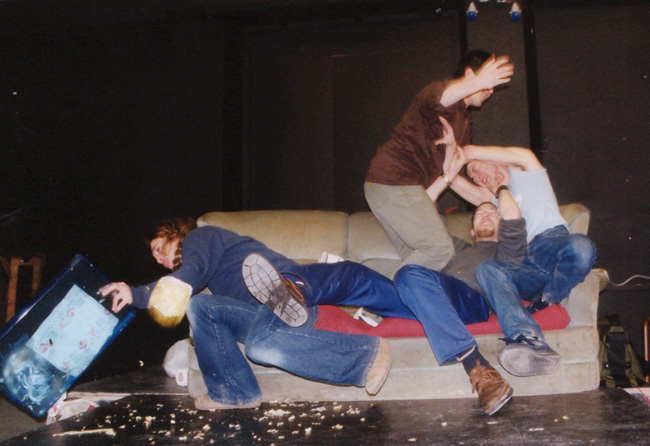 That was the big question at the National Student Drama Festival, and the quality of the answers was admirable, says Robert Hewison

The 48th Sunday Times National Student Drama Festival could hardly fail to reflect the public events against which it took place. However joyous this annual gathering in Scarborough of nearly a thousand of the country’s most talented young theatre enthusiasts may be, the 14 productions on show had been created in a year of war and rumours of war. Warwick University’s cut-down version of Karl Kraus’s 1917 satire The Last Days of Mankind brought contemporary anger to a neglected epic. A group of graduates from Liverpool’s Institute for Performing Arts reached further back to the blood and betrayal of Macbeth, where Christopher Dane’s comic porter broke away from Shakespeare with a riff on the phallic force of swords and bombs, and the language control of Bush and Blair. […] As a celebration of theatre of all kinds, the festival places no limits on expressive forms. Guns, war, violence and persecution were the context of Graham Ireland’s short dance piece Checkmate, from Brooksby Melton College, in which a trio of trench-coated reporters make a victim of one of their number. The concern with the role of the media shown in this abstract work surfaced even more forcefully in the festival’s best new play, Chris Perkin’s Like Skinnydipping. Here, the media was present in the shape of looming television screens, bringing us fictive news of local murders and foreign wars. Hugely ambitious, Perkin’s play shifted back and forth between now and 2007, when war has become permanent. Against this distressing background, four teenagers try to cope with growing up, the difference between their younger and older selves demonstrated not only by their being played by different actors but by the attempt of one of their number to recover the past in a filmed reconstruction. The Pirandello-like introduction of a third set, as performers, allowed for the telling juxtaposition of fictional and real versions of the same events. Perkin and his co-director Lydia Ziemke, won the Director’s Guild Award for solving the technical problems of his script. The Sunday Times Playwriting Award was given in recognition of the play’s willingness to address contemporary issues. […] The festival has truly been a celebration of theatre talent in all its forms, but it has not ignored the wider world. It would have been irresponsible if it had. (The Sunday Times, April 27, 2003) 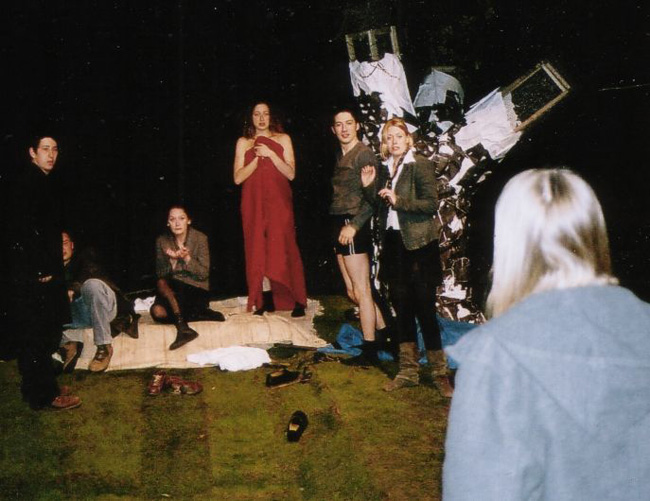