»But still always there is hope.«

Omar Fetmouche was until recently the Director of the Theatre Régional de Béjaia »Abdelmalek Bouguermouh« in Algeria, but has decided to step back from this very administration-heavy post for a while and to devote more time to artistic work, to developing the theatre for the people living in his home area outside of Algier, and to concentrate on running the »Festival international de théâtre à Bejaia«.

He has a long theatre career as a writer, director and artistic director. He has had many opportunities to live and work in Europe creating a purely artistic career, but has decided to build up and support the theatre in Algeria.

He visited Berlin for the first time at the end of July 2016 in order to get to know a city the history of which he knows well because Algeria had strong ties with east Germany, and the theatre history of which he knows well anyway. While paying homage to the various great theatre men and women and important places of theatre in Berlin, Lydia Ziemke and Omar Fetmouche conducted the first discussions for a new project, which will be realised 2017 in cooperation with »Szenenwechsel« – a funding program by the ITI International Theatre Institute and Robert-Bosch-Stiftung.

Lydia Ziemke: How would you describe your work at the moment, in the theatre and in the Festival?

Omar Fetmouche: I am in the process of preparing the International Theatre Festival of Bejaia, which will take place in October/November, and which I have been leading for seven years now. Apart from that I am taking an administrative rest from being the Artistic Director of the theatre in Bejaia in order to save time and to concentrate on artistic creation – on producing work, conceiving work and so on. I ran the theatre in Bejaia, which is one of the most important public theatres in Algeria, for more than 11 years, and we have managed to create a theatre building and company, which is functioning well in all its capacities.

LZ: As far as I understood, during the rest of the year, there is not that much theatre happening in Algeria, is that right? How is the situation in general?

OF: In Algeria there are some private theatres and autonomous theatre companies, but otherwise there is no great artistic production (definitely no regular state theatre). Because the theatre in Algeria is “under construction”, we are literally in the course of building it up, of creating ideas, initiatives and experiences.

There is a young generation who are bringing a fresh breath, who are developing a new way of making and living the theatre. That’s how we are now going through a phase of experimentation, which will bear fruit maybe in 5, 6, 7 years. Algeria in general is in a “phase of construction” – culturally, industrially and in many other ways.

LZ: Over there on tour we noticed that the people had a real hunger for the theatre, especially, we would like to think, the international theatre.

OF: Yes, they definitely have this hunger. We have a large audience. We have independent theatre companies who move around and work on the periphery of the cities, they play in villages, they play in the streets and so on – that is how the theatre lives with the people and the people find out slowly what it means, what it can be, the theatre. And so our International Festival in Bejaia always has a large audience who is interested in theatre. We typically play 20 shows per day, and all 20 places are full of people. The Algerian people like the theatre, like watching plays and really value the Festival as a place of international exchange. Even if they don’t understand the language, they are there, they listen and they engage.

I believe that the theatre is a place of humanity, of human relationships. It is transported in many ways, it is not a question of language but one of contact, of passion, of communication. The theatre is a way of living with a breath of fresh air in it, the air of life, of hope and that is why our people love the theatre as a special place.

LZ: And you said that now there is a plan to work in schools with the theatre in Algeria?

OF: Yes, indeed, at the moment there is a possibility with the minister of education and the minister of culture to introduce theatre to the school system. If we want to reach an academic level with it, the theatre needs to be introduced early at school level, or we cannot get very far with it. It should help inspire pupils to decide to get higher education in arts – in theatre, in music, in visual arts…this way the pupils in the different schools, they have a choice. Nothing is forced on them but they can decide if they want to do this or the sciences or mathematics or whatever.

This way the institutes of higher education in theatre and arts they receive people who are already acquainted with the theatre, who have already learnt the basics and this will lead to real teaching and learning. Because now they get whoever, whoever from the university, from department of biology etc, not the people who want to do the theatre, but whoever is wanting to get a diploma for finding better work or do something else, and they don’t care which subject it is.

The theatre is a passion, its not something that one does or not, but it is a choice of passion, of sincerity and of commitment. It is a human act, it is always, with each new project, it is a declaration of love!

LZ: The Algerian society is young, and it is in the course of developing – what were the forces that have stood in its way so far?

OF: Yes, 65 % of all Algerians are below 40 years of age, so it is a very young society. But unfortunately Algeria had a few problems in her evolution since the independence (from France). As you know that since the independence we have come out of a phase of being colonized by the French, which has left behind a lot of voids and a lot of trauma of war – there were many wars and many victims and we had to deal with those first of all.

And then the second problem was – just when we had been able to breathe a bit, at the end of the 80ies, beginning of the 90ies – we had terrorism, Islamic terrorism, which came and fought battles in the country for over 10 years. This has halted and belated all ideas and all projects because unfortunately there have been assassinations of the men of the theatre, the men of culture, of journalism, of science, of knowledge. It meant that the Islamic terrorism has attacked directly the essence of the country, it has murdered and literally decapitated all the intelligence. And there were all the effects you can imagine – for example in the theatre the people were scared because of possible bombs in the auditorium, and there were many false alarms, and so the people stayed away. We really had very difficult times.

But still always there is hope. And with the experience paired with the hope and the young people we have, we are also able to start strong things fast and to start constructing life. Among the young people there are many who have many good ideas, and who can effect change within all areas of life – economic, industrial, scientific and cultural. So we have hope. But these young people need the means to do it, the schools, the universities, they need a better apprenticeships, and training and in our métier that is what we try – we try to offer: training and formation with the shows and with workshops, courses and masterclasses and many other efforts during our Festival.

LZ: In the Festival this year, who will come, what will happen?

OF: There will be a lot of things: we already have 17 countries who have offered their shows. And in terms of form there is a lot: there is monodrama, the classical theatre with large casts, there is street theatre, there is circus theatre. We do not set limits on the genres, and thus there is something for everyone.

This way we have received companies from Russia, from Austria, Germany, France, Quatar, Jordan, Lebanon, Palestine, Syria – nearly every year we have the four continents visiting our festival. And of course we have a lot of African groups who make a very interesting theatre, which needs to be discovered.

Our task is to open up new audiences, to give to all the audience the chance to taste many different things. And this year we have an especially big project for training:

We offer theatre workshops with a Franco-Chiliean theatre group. A group will come from Paris together with Mister Radrigan, a great dramaturg from Chile, and have invited Fatal Chaibi from Tunisia who will present his work with the Tunisian Theatre and also invited Lasaad Jamoussi, who directs the Festival in Carthage, and so what we have this year, we call this a Panorama, a special focus on the theatre of Tunisia which we look forward to presenting to the audience – because Tunisia is our little sister, is our neighbour – and there will be a lot of things we can do together and in which the people can participate.

For the Festival next year we look forward to developing our work with suite42, and the exchange with the German theatre. There are two very interesting projects planned and we feel it will be a very fruitful collaboration.

Also in 2017 we will have a focus on Absurd theatre, mainly the writings and work of Samuel Beckett. 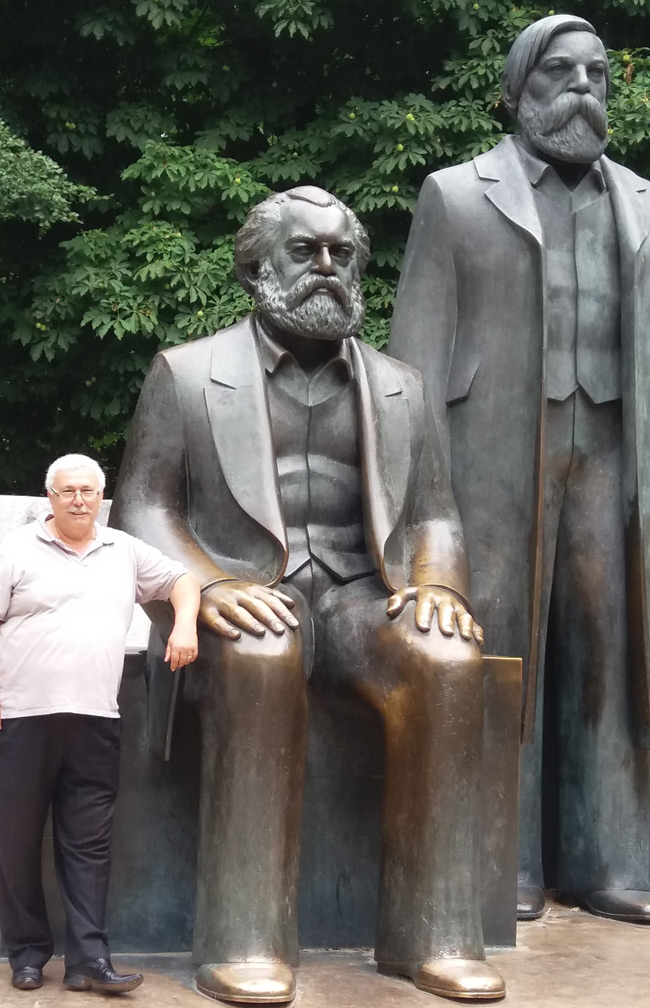